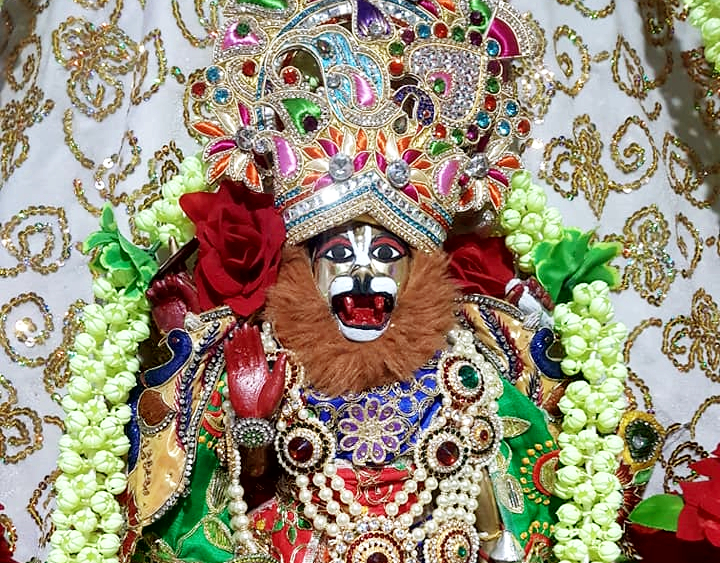 “Whenever and wherever, there is a decline in religious practice and a predominant rise of irreligion, at that time, to re-establish the religious principles, I descend Myself.”

To commemorate this victory of righteousness over the evil, Shri Chaitanya Prem Bhakti Sangh takes the initiative and celebrates this festival every year with great joy and reverence, under our present acharya Gurudev Shri Bhakti Shastri Ji Maharaj, at  Lakshman Temple, Bharatpur, Rajasthan.

There was a time in Satyuga, when the world was under the rule of a demoniac king, Hiranyakashipu. Hiranyakashyapu had been blessed by Lord Brahma that he could neither be killed in day nor at night, neither on earth nor in sky, neither by any kind of weapon nor by any mystic power, neither by any man nor by the animals. Any entity in the creation of Brahma could not devastate him.

Thus, being empowered by Lord Brahma, He demolished all the religious activities in his kingdom, the brahmanas could not perform any sacrifices. Even the demigods feared of the devil king, but there was someone who still believed that the Lord is Supreme powerful and will protect him from danger and that was Hiranyakashipu’s own son – Prahalad Maharaj.

Hiranyakashyapu tried to kill his own son Prahalad. He was thrown from the top of a mountain, attacked by weapons, crumbled by elephants, bitten by snakes, burnt in fire and even, he was fed poison, but to no avail. Every time, Prahalad was protected by the Supreme Lord. One day, being fed up of the unknown potency that protected his son, he asked, “Where is your Lord?” Prahalad humbly replied, “He is present in every single atom. He is inside me and you as well.” Hearing this, Hiranyakashyapu became furious. He picked up his club and struck a pillar with all his might, screaming, “Let me see the potency of your Lord, today.” And to everyone’s surprise, a ferocious being came out from within the pillar. He was half-man and half-lion, an incarnation of Lord Visnu, “Shri NARSINGHA DEV”. Here, the appearance of Lord from a pillar is very significant. This not only establishes that the Supreme lord is present in each and every atom but also defies the Mayavada philosophy that the Lord is formless. Thus, by appearing from a pillar, the Lord condemns all the Mayavada followers and shows to the foolish people his form, which is eternal, knowledgeable and blissful.

The Lord thus came out and put the proud king on his lap. At that time, Hiranyakashyapu remembered the boons that he got from Lord Brahma and also realized that none of it had been violated. Thus, with a dreadful roar, Lord Shri Narsingha Dev pierced the wasp-like stomach of Hiranyakashipu and wore his intestines as a garland. The demon was finally dead and the devotees were now free to worship their all-powerful Lord. Trumpets blew in the sky and the demigods started showering flowers on the Lord. The righteousness ultimately emerged victorious over the evil. Thus, by appearing as Shri Narsingha Dev, the Lord fulfilled his prophecy of Bhagavad Gita:-

“Whenever and wherever, there is a decline in religious practice and a predominant rise of irreligion, at that time, to re-establish the religious principles, I descend Myself.”

To commemorate this victory of righteousness over the evil, Shri Chaitanya Prem Bhakti Sangh takes the initiative and celebrates this festival every year with great joy and reverence, under our present acharya Gurudev Shri Bhakti Shastri Ji Maharaj, at  Lakshman Temple, Bharatpur, Rajasthan.

It’s a five day long festival, where devotees from all over India come and celebrate the festival. Every morning we have prabhat pheri ( a small procession in the city) with all devotees singing to the tune of Hare krishna mahamantra followed by the Lecture by Shri Guru Maharaj. After that in evening we have melodious kirtan by various devotees and followed by lecture by our Guru Maharaj Ji deeply explaining the story of Lord Narsingha & Prahlad Maharaj and various other pastimes.

One day before the Narsingha Chaturdashi festival we have the parikrama (circumambulation) of the famous Banke Bihari Temple in Bharatpur with melodious kirtan and devotees playing mridanga, kartal and other musical instruments. On the narsingha Chaturdashi festival day we have 12 hour Mahamantra melodious kirtan by devotees. All the devotees observe fast on this day and they refrain from grains & have fruits, milk curd etc. In the evening, we have Maha-abhishek of little idol of Lord Narsimha with milk, curd, sugar, honey and ghee which is performed by our Guru Maharaj Ji. This panchamrita is distributed to all devotees and they have it considering themselves the most fortunate ones to receive this panchamrita. We also have recitation of the Dashavtara-strota in the evening which glorifies all the ten incarnations of Lord Krishna and it also includes the narsingha prayer. Everyone gets so much enchanted by and engrossed in it and all this is carried out under the supervision of our Guru Maharaj Ji and its because of His utmost and countless mercy that everyone present there feel themselves on an elevated spiritual platform.

The next day of Narsingha Chaturdashi we have a grand procession (Nagar sankirtana-shobha yatra) in which all devotees move in the city singing, dancing playing musical instruments with a lot of enthusiasm and excitement. We have many chariots in which Various portrait images of Lord Narsingha, Prahlada maharaja, lord Radha-Krishna , previous acaharyas of our guru parampara are seated. Our present Guru Maharaj Ji sits in a separate chariot and He appears so elegant and mesmerizing that we feel we should take His darshan again and again. Many devotional bhajans are also sung by devotees and the entire atmosphere becomes so spiritual that we just forget what we have left at home, our jobs, other business etc. and we just get engrossed in that Bhakti atmosphere. The procession finally ends at Lakshman temple and we have the Aratika performed followed by the lecture by Guru Maharaj Ji.

The last day of the festival we have a grand Feast prasadam for all the devotees and so many food items are prepared and offered to the Lord , all devotees sing the Bhoga Aratika so melodiously with all the musical instruments. Finally the devotees return to their homes after getting return gifts from the local devotees of Bharatpur. We invite you to this festival as attending such festivals in guidance of Guru Maharaj and vaishnavas definitely helps in our spiritual progress and takes us a step closer to the Lord and increases our enthusiasm in Lord’s service.